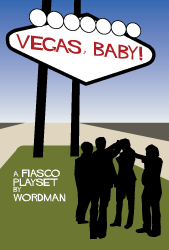 Vegas, Baby! is a playset for the Fiasco roleplaying game that tries to emulate “Vegas trips gone horribly wrong”, such as in films like Very Bad Things or The Hangover. This is not the Vegas-based playset that was evidently sold only with the game at Gencon 2010. As I was not in attendance at that convention, and that playset has not yet been released publicly, I’ve never seen it. (From a playtest report of it, it looks to have a different focus than this one.) (Update: The Gencon version is now available as part of the Fiasco Companion. It is eerily similar in some ways, totally different in others. It leans a bit more toward Rat Pack and Ocean’s Eleven style Vegas, which I intentionally leaned away from.)

This playset has not had much testing, so if you play it, let me know how it goes and how you actually used it. Chances are I will revise it at some point, based on feedback.

Thanks to Jason Morningstar for sending me his standard playset InDesign template. Normally, I would share the source documents for something like this, but the template and the fonts are not mine to share, so I can’t. You can, however, consider the contents of this playset to be free to hack, mutilate, mangle and destroy.

The PDF can be downloaded here: lw01_vegas_baby.pdf

A slightly updated version can be found on itch.io.