Winner of the third DivNull Lark, Powers for Good has finally been released as a PDF.

One year has passed since the third lark was awarded to help produce Sage LaTorra‘s game Powers For Good. According to Sage’s progress notes on the game, the iOS application he pledged to create is awaiting AppStore approval. This will make his release a couple days late but, since he also produced the totally excellent Dungeon World while making this game, I think we can cut him a little slack.

You may have noticed I’m not running a similar “$1,000 for an indie game” concept this year. This is mostly because I don’t have the bandwidth to deal with running it this year, but also partly for other reasons. Since the first lark, Kickstarter has grown popular for managing the risk of an indie game launch, and it may be a better fit for bringing quality games to market than contests like this one. I have made a point of funding nearly any rpg-related Kickstarter I find. I have to check to see if I’ve spent $1,000 on Kickstarters yet, but it seems like it might be a better use of the cash. Still thinking about it though.

I thought it might be interesting to see what became of some of the other ideas pitched a year ago. Some of these were already close to completion at the time. If you pitched last year, and I get the current details wrong or couldn’t find information about the game you picthed, post a comment to correct me. In the order they were pitched: 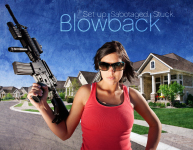 Blowback, recipient of the first DivNull Lark, has been named runner-up in two categories of the 2010 Indie RPG Awards, including Indie Game of the Year, with judges saying:

A fantastic game that takes a very specific premise and gives you nothing but that experience.

Elegant game of needs in conflict, well tied to a superbly focused (and interesting) high concept.

The second category is Best Production:

The layout and use of photography do an excellent job of capturing then genre and tone of the game.

Elizabeth raised the bar for us all in this great game with an aesthetic mixing the best of hollywood spi-fi with GQ and Vogue.

Picking just one of the proposals in the third Lark proved to be more challenging than expected. After deliberation (and some unanticipated delays), DivNull is pleased to award the $1,000 gift to Sage LaTorra for the game “tentatively called Powers for Good, … based on world-saving team superhero comics”.

Congratulations and best of luck to Mr. LaTorra. We can’t wait to see the result.

A year ago, the first DivNull lark helped bring Blowback to market. It’s October, so let’s do it again…

The next DivNull lark will match the first: a gift of $1000 to help bring an independently published story game to release within a year. That is, pitch me your idea for how you would use $1000 to either make a new game or improve an existing one that hasn’t been released, and I’ll donate $1000 to the idea I like best to help make it happen.

The winner will be decided solely based on my learned deliberation capricious whim; however, I do take advice. If you see an entry you really like, feel free to lobby for it in a response below.

All responses to this blog are vetted manually before appearing. Historically, I am a bit slow at doing this. I will try to be more prompt for the next few weeks, but if your comment doesn’t show up right away, don’t panic.

Update: This contest is now closed to new submissions. I will, however, leave the comments open for people to give advice on the entries they like.

The Cartographer’s Guild members have spoken, and the entry by relative newcomer Crayons takes the prize in the second DivNull lark.

Crayons has given me permission to reproduce the winning map here (click it for a much larger version): Elizabeth Shoemaker, recipient of the first DivNull Lark, has announced that its result, Blowback, is now available for pre-order.

Congratulations to Ms. Shoemaker on the completion of your game. I look forward to playing it, and can’t wait to see the iOS tools you have planned.

DivNull conceptualized this month’s mapping challenge over at the Cartographer’s Guild, a site dedicated to making maps for games. I also am sponsoring the contest’s prize, a $200 gift certificate to Indie Press Revolution.

The gist of the challenge is to design a map of a building (or set of buildings) that focuses geomantic energy, under a particular set of guidelines, in one month. This is explained in more detail (with perhaps more asterisks and sportscars than necessary) on the challenge page. This challenge follows the same rules and procedures as the others.

The winner is decided by members of the Cartographer’s Guild forums, which are free to join. Good luck!

(Also, the contest doesn’t mention or require this, but if you want to enter a map, please consider posting it under a Creative Commons Attribution-NonCommercial-ShareAlike 3.0 Unported License. Thanks!)

After some difficult consideration of the proposals in our first Lark, DivNull is pleased to award the $1,000 gift to Elizabeth Shoemaker for her interesting ideas for the development of her game Blowback. In addition to helping make a fun game, this gift will help the game offer a fresh depiction of women (with art by women), advance roleplaying’s use of technology and document the production elements for the edification of other designers.

Congratulations and best of luck to Ms. Shoemaker. We can’t wait to see the result.

The Story Games forums focus on the creation of independently produced roleplaying games. On October 2nd, 2009, forum member Valamir started a thread asking members to hypothesize about how they would use $1000 to produce their game.

On a whim, DivNull Productions decided to take this out of the realm of hypothesis, with Wordman posting:

Posted By: ValamirImagine said benefactor announced “Pitch me your game ideas and the designer whose idea I like best will get $1000 to bring it to fruition”

Other popular game design forums maintain, however, that debate about hypothetical situations are useless and only “actual play” matters. So, let’s play…

As of now, there actually is a benefactor (i.e. me) saying “Pitch me your ideas for how you would use $1000 to either make a new game or improve an existing one that hasn’t been released, and I’ll donate $1000 to the idea I like best to help make it happen”.

While this pitch process was neither widely advertised nor, to be frank, particularly well run, a number of compelling proposals were submitted. These remain visible in the thread linked to above, but have also been reproduced as the first 11 comments of this thread as well.

We are no longer accepting pitches; however, there are likely to be more of these “DivNull larks” in the future. This one was something of a trial run, so was deliberately kept somewhat quiet. Future larks will be more public.

DivNull will announce who receives the gift in a few days, both on this blog and in the original Story Games thread.