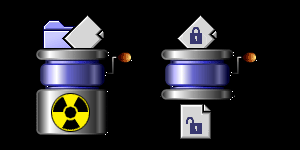 When it was first released, Mac OS X had an odd problem: it allowed a user to create files that they couldn’t delete. This wound up having to do with a bug between way OS 9 could “lock” files colliding with the way OS X did something similar. You could fix this on the command line, but I got sick of doing so, so built some quick utilities to handle this just by dragging and dropping.

One of these, DropUnlock, is still available, but today DivNull is officially discontinuing DropNuke. As you would expect with something named “DropNuke”, this version of the utility was pretty much the final option, a scorched earth way of permanently dealing with an undeletable file (using not only chflags calls, but also rm -rf). As you can tell by the warnings on its old download page, you could wreak a lot of havoc with DropNuke if you didn’t know what you are doing.

Since the “undeletable file” problem has been addressed in subsequent versions of OS X, and DropUnlock still exists for people still using the old version, it seems smarter to remove DropNuke, just in case.

Update: The technology on which DropNuke and DropUnlock was built doesn’t run on modern versions of OS X, so neither of these scripts will work any longer.

One thought to “DropNuke discontinued”